Rholi was the next stop.


An interesting youth that the scouts met was twenty five year old Prakash Mani who is a resident of this flood-affected village which has a population of 1000. The entire district (Supaul) has only 52 high schools for a population of over five lakh (five hundred thousand) children aged between five and fourteen years. This means that for every ten thousand children passing out of middle school, assuming that they all reach middle school in the first place, there is only one high school. Prakash’s village is one of the exclusive few to have a middle school. 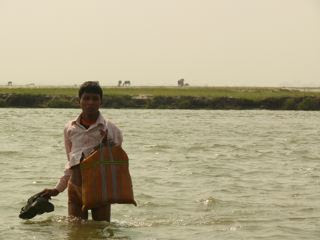 However, the quality of education at this middle school is quite poor, since there are no competent teachers. To top this of, is the fact that there is no high school in the vicinity. The nearest one is three hours away on foot. So going to school includes walking several miles on sand, crossing the river by boat and if the water level is low, then wading through the river (as in the adjacent photo). According to Prakash, if one were to remain dependent on that high school for education, then it was unlikely that one would learn anything much since the school closes down for four months every year due to the monsoon and the flood.

Most students who want to go to high school, are forced to move out of the village, but only very few of them can afford to do that. Also, this option is open only to boys. For the girls, moving is out of question, so a high school education only remains a distant dream.

With nearly no opportunities for education, the youth is resigned to working in the fields. Cultivation too holds no great promise as the fields get flooded or washed away every year and those that survive the flood are rendered unproductive by the sand deposits. 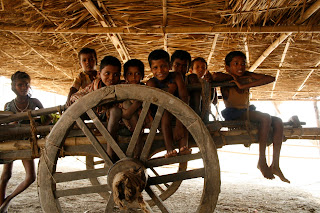 Prakash identifies education as the foremost need and demand of the youth of this region. This is closely followed by the need for generation of employment opportunities even as educational facilities are in the process of being scaled up.
Children at Rholi hanging out with no school to go to
Posted by PraxisUK at 8:30 am